For many of us, there are bigger credit card concerns than how environmentally-friendly they are. Considering some companies estimate that PVC-based credit cards are responsible for as much as 75 million tons of unrecyclable waste each year, though, I think most everyone can find merit in an eco-friendly solution. Thanks to American Express, we may just have one.

The card issuer has been working with a company called Parley for the Oceans. Parley, a marine conservation group, has already partnered with brands like Soma and Adidas to create recycled plastic products that both help reduce future waste and utilize the waste we already have. Now, along with American Express, they have helped to create the world’s very first ocean plastic credit card.

My home is pretty eco-conscious. My kids drink from reusable straws, we bring our own bags to the grocery store, and we recycle everything that we can. But I’ll be honest: even though I’ve been in the credit card industry for many years, I’ve never really thought about the impact that credit cards could be having on the environment. 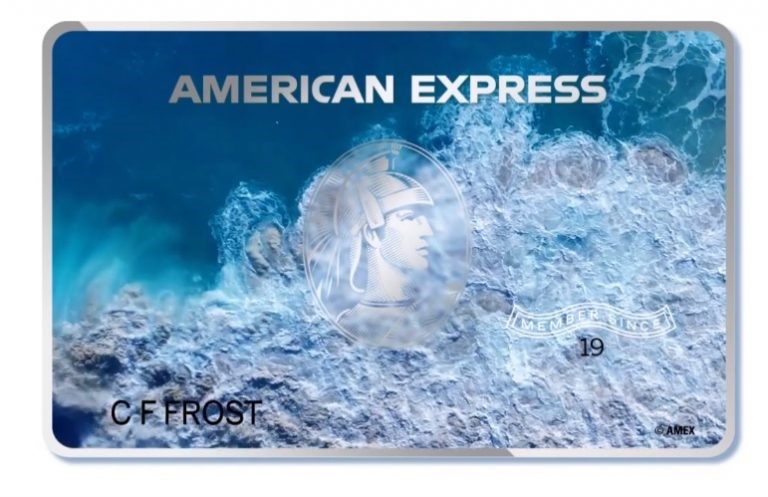 Credit cards today are made from PVC, which is a very toxic plastic. In its pure form, it can be melted back down and recycled; unfortunately, you’ll rarely find a credit card that is pure PVC, as other materials are added in (sometimes, if only in an attempt to make a “cooler” looking card). The worst part is that these cards essentially don’t biodegrade on their own. If you were to toss a PVC credit card in the fire, it would release extremely toxic gases into the air. If you try to throw it in the recycling bin, it will still wind up in the landfill. Your best bet, at present, is to simply cut it up and throw it in the trash, where it will sit for thousands of years.

Now, think about that in terms of how many credit cards you may have. You probably carry at least two or three card products, if you’re like the average American. Each of those cards will expire every few years, requiring a replacement. You may also lose one along the way, have your wallet stolen, or the chip may stop working, which will require yet another card to be sent. In a given decade, you probably have your hands on at least 10-15 plastic credit cards. The waste adds up. Some conservation companies estimate that, between production waste and the actual waste produced by disposed-of credit cards, our environment is burdened by as much as 75 million tons of non-recyclable, PVC-based waste annually. As many as 8 million tons of it winds up in the oceans each year.

How Ocean Plastic Can Help

Ocean plastic is exactly what it sounds like: it’s a recycled material that is created exclusively with plastic debris that has been intercepted and collected from our oceans. It is then up-cycled to create new products, having a two-fold effect: we get even more dangerous waste out of the oceans AND we wind up with products that were more environmentally-friendly to create. Most of these ocean plastic products can be upcycled again and again, breaking the cycle of production waste and end-product waste.

There are hundreds of groups whose mission is to help remove the plastic waste that’s clogging the oceans, our planet’s biggest source of life. Whether utilizing solar-powered machines that collect debris as they float along or organizing groups of divers with mesh bags, plenty of people are making the biggest difference they can in this problem. Companies like Parley are not only spearheading cleanup efforts, but they’re also helping to figure out what we can do with the plastic collected.

Parley recently partnered with Adidas to create a very popular high-performance shoe, each made with approximately 11 recovered and recycled plastic bottles. The shoe was a big hit – they sold over a million pairs that first year – and has helped make an environmental impact. Now, Parley has partnered with American Express to tackle the plastic problem together.

The new credit card, a collaborative effort between the two companies, is expected to be available in the next 12 months. The prototype was to create entirely with ocean plastic, so it is both strong enough to hold up to your daily use and it has helped clean out the oceans in the process.

Not much is known yet regarding which Amex products will be offering the new ocean plastic card, or even how many plastic bottles went into the production of each. However, I’m sure American Express will be happily sharing all of this information – as well as a look into their collaborative effort with Parley – when the card is closer to release.

Whether you’re eco-conscious or not, the fact remains: our oceans and landfills are overloaded with plastic, and it is quickly becoming a global concern. While you don’t hear much about this overlap in the credit card industry, I have a feeling that we are going to hear these conversations coming up more and more in the years to come. 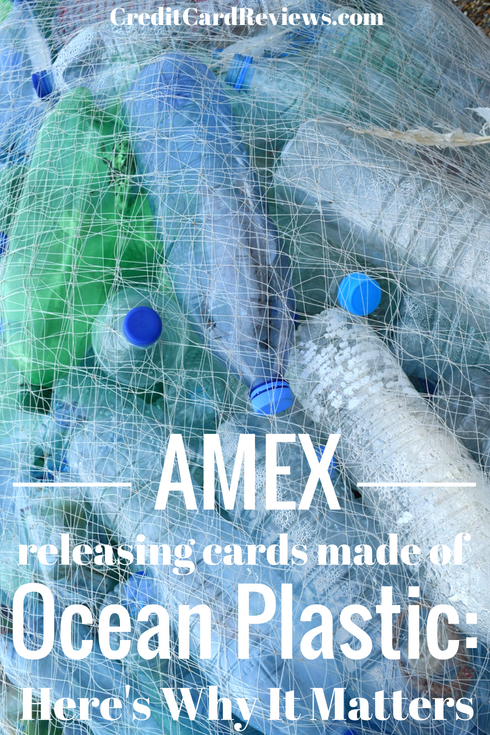