Did We Learn Nothing from the Recession? Credit Card Debt is Only Getting Worse 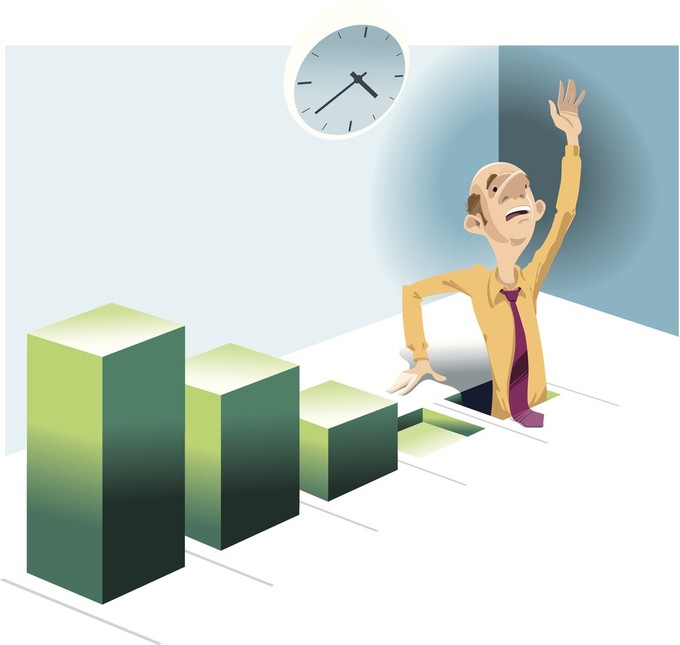 You would think that the Great Recession would have taught many of us some tough financial lessons. After all, many of us saw our jobs, mortgages, debts, and even home prices impacted. However, according to the latest data from WalletHub, it would seem that Americans are quick to forget the financial woes of the recession and are, in fact, weakening financially.

Prior to the hit of the Great Recession, Americans were racking up credit card debt like it was going out of style. The spend-spend-spend attitude – combined with a national propensity for buying more home than we could afford – resulted in a harsh reality check once the 2008 financial market burst.

In fact, the credit card debt held by Americans in Q4 of 2008 was the highest ever, at $983.9 billion. After the recession hit, we tightened our belts. The nation began spending less, especially on credit (either on purpose or because lenders simply weren’t raising credit limits, or a combination of both), and national credit card debt sunk to a low point of $776.2 billion to start the 2011 year.

Since then, though, we seem to have rebounded. Our retirement accounts and stock portfolios have largely rebounded from the hit they took in 2007-2008. Our home values are trending ever-upward, interest rates dropped to incredible lows, and lenders are once again handing out lines of credit. But it would seem that, as a country, we haven’t truly learned our lesson.

One Step Forward, Two Steps Back

Sure, the credit card debt dip in early 2011 was great and an excellent barometer for the country’s newfound interest in spending within our limits. America may have since forgotten the pinch of the recession, though, as credit card debt has been steadily ticking upward ever since. 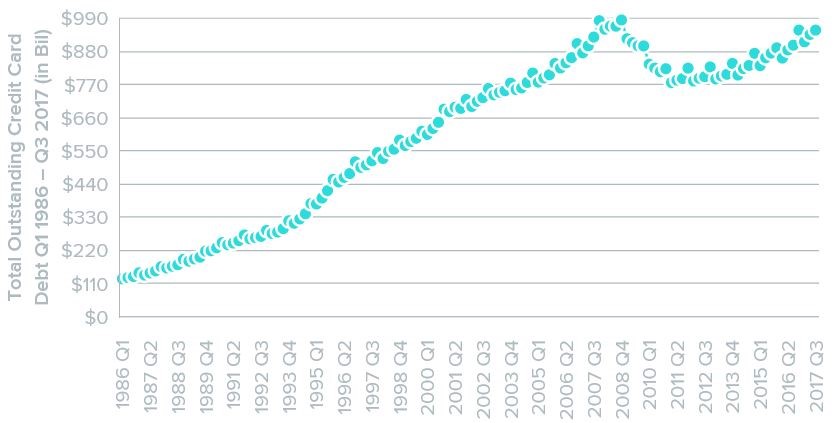 In fact, as you see, we are quickly on our way to not only reaching those pre-Recession highs but, at this rate, far surpassing them. The 2017 year is proving to be the worst year for credit card debt since the Recession, in fact, and we are easily on track to pass the $1 trillion mark by the end of the year.

At the beginning of the year, Americans paid down their credit card debts to the tune of $30.5 billion, resulting in an encouraging Q1. However, they quickly undid their progress in Q2 by not only racking that amount up again, but adding another $33 billion in debt to the tally. Then, in Q3, we saw the addition of another $22.2 billion in credit card debt, which is actually the highest Q3 debt accumulation since 2007… immediately prior to the market collapse.

Since credit card debt and spending habits are an excellent barometer for the financial health of the country, this news is extremely concerning. Americans are on track to shoot past the $1 trillion credit card debt mark before the end of the year, putting us at a level we’ve not yet encountered. The average American household now carries $8,109 in credit card debt, which is up 5% from the $7,711 average at this time in 2016.

It’s obvious that Americans are spending more than they should – and, frankly, more than they can afford to spend. We are creating a significant consumer debt bubble and, as we all know, bubbles always burst in the end. Consumers are clearly becoming weaker financially, which begs the question: how long can we continue this trend, and just how bad will things get before we experience another Great Recession-type crash?

What You Can Do

If you recognize these trends in your own spending and credit card debt, now is the time to nip it in the bud. The sooner you can rein in your spending and climb out of debt, the more prepared you’ll be for an eventual bubble burst. Plus, getting your finances and spending habits in line will help you avoid paying interest, allow you to save more for the future, and even afford you the luxury of financial freedom.

Here are a few basic steps that can have a big impact:

• Pick through your finances and find the leaks. If you’re overspending, there are areas in which you can cut back. Start small and manageable; the first step is to evaluate where your money is going and where you can afford to scale back.

• Set a budget and stick with it. Find a budget system that works best for you, even employing the help of apps and programs to help you track spending categories each month. When you’ve reached your limits, stop spending!

• Save first. The easiest way to pay down debt and begin saving for the future is to pay yourself first. Don’t wait to see what’s “left over” at the end of the month; instead, calculate the dollar amount or percentage of your income that can go toward debt repayment or a savings account. Then, transfer that money first thing when you get paid.

• Stop charging to credit cards. Don’t want to continue building your credit card debt? Stop using plastic altogether. If you’re having serious issues with self-control, locking up (or even cutting up!) your credit card might be necessary for a while. Pay with cash or check for a few months until you get control of your spending. Then, if you feel comfortable reintroducing credit cards, be sure to pay them off in full, on time, every month.

Americans are teetering on the edge of another credit card debt bubble, and it’s only a matter of time before it bursts. If we want to avoid the financial devastation that the Great Recession brought, we need to take a look at our habits now, and make some serious changes. 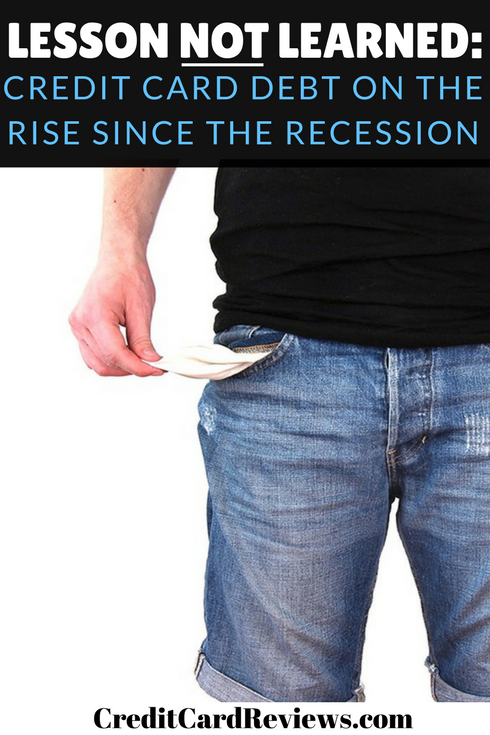