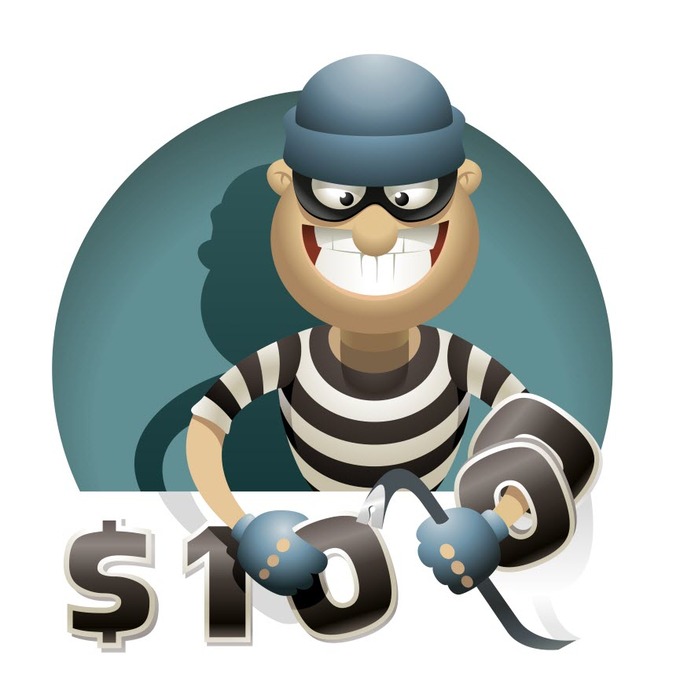 As if the news of the Target credit card breach hasn't been enough, two other retailers -- Michael's craft stores and Neiman Marcus -- have also reported breaches in which consumer credit card data may have been stolen. On top of that, there's another credit card scam happening that's been flying under the radar until now: The $9.84 scam.

The Better Business Bureau recently released a statement warning consumers about this con, urging them to look closely at their credit card statements for unexplained charges, particularly one that's $9.84. It's easy to think this is a legitimate charge, but it's actually a scam, one where if a lot of people just ignore the charge, makes some criminal a nice bunch of money.

What makes this scam work so well is that the dollar amount is low and precise. It's not necessarily enough money to get on your radar, and if you, and it's such a precise amount that it really does seem like it could be a small purchase.

The charge will probably be listed as coming from a website that may be unfamiliar to you. Brian Krebs of the blog Krebs on Security has dug into this issue [link to: https://krebsonsecurity.com/2014/01/deconstructing-the-9-84-credit-card-hustle/]

and discovered a large network involved with this scam, as well as a long list of domain names that could show up on your statement, including eetsac.com, livecs.in, cs-casa.com and techcs.in. However, because no one's yet figured out who's behind this scam, they could still be creating new websites for their bogus charges. This scheme has been going on throughout 2013, with more reports of it happening around the holidays, when credit card use is high and you might be less likely to look at all of the charges on your statement.

If you notice the $9.84 charge, you can try to investigate it by going to the website listed on the statement charge. You might not get any website at all, or you might find a generic website with a customer support page that promises a refund if you e-mail or call.

Don't bother. Even though the person on the other end of your call may say they'll refund the money, it's more likely that they won't. The Better Business Bureau recommends going directly to your bank or credit card issuer to report the false charges. Somehow your personal information has ben compromised, and the only safe solution is to report the charge and get a new credit card. If you find out that there's no actual website connected to the charge listed on your account, that's a definite sign your information has been stolen.

It's important to take the step of closing your account and opening a new one, even though it's a huge hassle and definitely costs you more in time than the $9.84 charge on your statement. However, it's important to do this because if you don't, you're a prime target for other scams like these. Once the criminals know they can use your card number, they'll continue to do so.

When you check your card statements, keep an eye out for other similar charges. Because this story has gotten out, one way the criminals may try to keep at their game is to change the dollar amount they charge and come up with a whole new roster of websites from which they can continue their scheme.

While being the victim of this type of scam is an incredible inconvenience, you're not alone. Earlier this year, the Federal Trade Commission reported that the number one complaint it received in 2012 was identity theft, a distinction it's received for 13 years in a row.