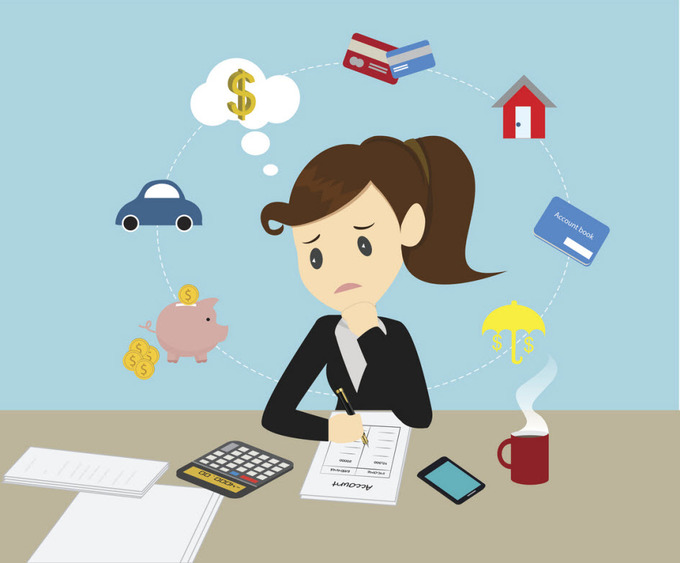 If you had to take a guess, how much would you say the average American holds in credit card debt? Would you guess $500? Maybe $3,000? Well, according to Experian’s latest study, we are actually carrying around much more: an impressive $5,551 in debt each.

The problem with this number is that a good chunk of people don’t carry any debt at all, skewing the average considerably. In fact, another study found that only 38.1% of Americans hold balances on their credit card accounts. So, what exactly does that mean? Well, it tells us that the actual credit card debt in this country’s average household is somewhere around $16,048.

How Bad Is That?

Carrying credit card debt can take its toll, both on your finances and your emotional health. If you’re walking around with a balance on a high interest account – especially if it’s anywhere near that national average, or more – you already know that it has an impact.

Debt diminishes your cash flow. Being forced to allocate a portion of your income each month to paying down debts takes away some of your budget’s freedom. Instead of putting that extra money toward an emergency fund, a down payment on a house, or retirement investments, you’re throwing it at a high interest rate credit card.

A high credit utilization (debt-to-credit ratio) will impact your credit score. If you have a nice chunk of credit card debt just sitting around, it could be doing more damage than you think. Holding onto revolving balances, especially if you are utilizing more than 20% of your available credit, will ding your score. If you are looking to take out a personal loan, apply for a mortgage, or finally consolidate those student loans, you’re going to feel the pinch. This might be in the form of higher interest rates or flat-out denials.

Debt is exhausting. Whether you owe $2,000 or $200,000, the emotional toll that this financial burden takes can’t be ignored. You have to constantly worry about the hows and whys of paying off your balance(s), as well as how to manage every penny of your budget. You are probably actively monitoring your credit, knowing full well that you can’t get where you want until you pay off what you owe. Also add to it that, if you’re serious about paying off your debt, you are probably also cutting back on life’s little luxuries – you know, the vacations, date nights, a nice family dinners. All of this can begin to wear on anyone.

At the end of the day, the most important thing you can do is pay off your slice of that $16,048 average household pie, and fast. Your finances – and stress levels – will thank you.

How to Avoid the Statistic

Don’t want to be part of that national debt average, come the next study? The time is now to make changes.

If you’re serious about getting out of credit card debt, here are a few places to start:

• Consolidate your accounts to a promotional, 0% balance transfer card. If you have a revolving balance, you are probably paying a pretty hefty APR (somewhere in the range of 14-18%, most likely). If you’ve ever had a late payment, you’re probably paying a penalty APR, which often approaches 30 percent! It can feel like you’ll never get out of debt with those rates. The solution? A 0% APR credit card. Even if your approved limit is lower than what you owe, transfer at least some of the balance to the 0% card and use the debt snowball method to pay it all down. Then, once you’ve paid off the no-interest balance, transfer more. In the end, you’ll save yourself a ton of money in interest charges and you’ll have picked up some extra speed in your efforts to get out of debt.

• Call and ask for a lower APR. This doesn’t always work, but it’s worth a shot. The worst your lender can do is say No, so it’s worth giving them a call to see what can be done. If you’ve been a good customer, it may be worth their while to drop your APR a few percentage points. Just explain that you are trying to aggressively tackle your debt, and that you want to see if anything can be done.(For example, when I called Discover to ask this same question, they told me about a promotion where I would earn 5% of my payment back, just for paying more than my minimum due each month. This bonus saved me a total of $320 last year!)

• Don’t add more debt! This seems like an obvious rule, but is much harder in practice. Many people who are walking around with thousands of dollars in credit card debt are the same ones that have very tight budgets each month. It can be tempting to float yourself with that credit card, especially as your debt payoff efforts result in more available credit. Whatever you do, don’t spend on the card(s)! Go to a bare bones budget, track every penny, pick up a side hustle, and pay with cash… just don’t add to the debt pile while you’re still trying to shovel your way out.

There are times in life where it’s good to go with the flow of traffic. When it comes to the country’s credit card debt trends, though, you need to run the opposite direction. Use the tips above to get out – and stay out – of debt, and avoid the impacts that credit card balances can have on your life. Hopefully, when the next study is conducted, we’ll find that the country has made vast improvements, and we aren’t each walking around with $5,551 on our Mastercards.